Marked with reference points for nose and chin. The Phantom is approved by the American College of Radiology and is compatible with the ACR Phantom Cradles listed below (sold separately).


The MRI Phantom Cradles for use with ACR Phantom.

Beginning August 1, 2002 the American College of Radiology (ACR), as part of its Quality Control program, began requiring ACR accredited MRI sites to calibrate their MRI units on a weekly basis. ACR has introduced a head coil phantom designed and produced specifically for such calibrations. However, the ACR phantom is not compatible with other phantom cradles, nor does ACR produce such a cradle for the ACR phantom. This has left MRI technologists around the country to use various rudimentary devices to attempt to accurately position the ACR phantom and has resulted in a lot of wasted MRI time - with such positioning often taking as much as an hour to complete.  These MRI Phantom Cradles solve the ACR phantom positioning problem.

Consistently and precisely positions the ACR Phantom in the head coil in less than a minute saving valuable MRI time - approximately 30 minutes per week/26 hours per year and saves the MRI technologist the frustration of positioning the ACR phantom without a compatible cradle.
Available compatible with most GE, Siemens, Hitachi and Philips MRI’s. 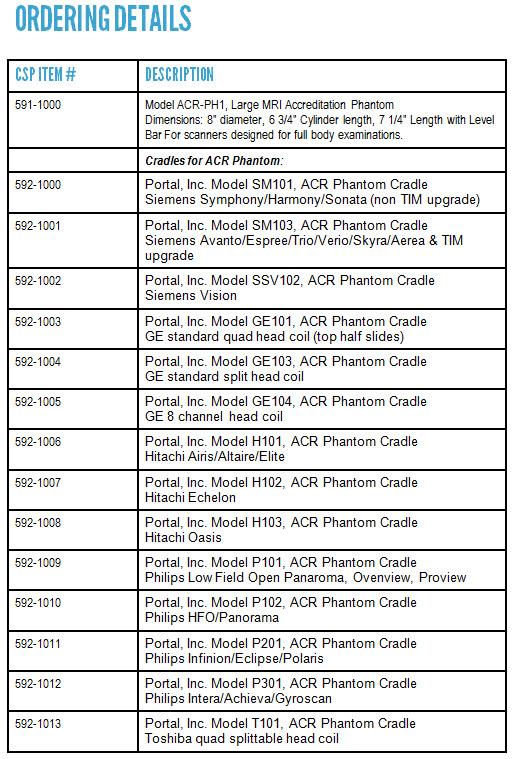 The MagIQ MRI phantom is an image quality phantom for Magnetic Resonance Imaging(MRI) comprising a single chamber (MagIQ) or two identical chambers (MagIQ Duo) which may be filled with different...

EVALUATE FFDM SYSTEM PERFORMANCE The CIRS Model 086, ACR Digital Mammography (DM) Phantom was designed under the sponsorship of the American College of Radiology (ACR) to test the performance of...

Black Piranha: Powerful wireless QA The Black Piranha is RTI's premium platform for advanced, reliable QA. The Piranha Multi (657) can be used for x-ray QA of all modalities, whereas the other...